The price of Bitcoin has seen somewhat of a rollercoaster today. The coin had surged as high as $13,500 in the early hours of the day but has since dropped lower to reach $13,275. The cryptocurrency has come down from the high of around $13,835 that was seen earlier in the week, and it looks to be struggling to break the resistance at $13,475 over the past couple of days.

Bitcoin’s price has been surging in October after it broke above a symmetrical triangle pattern at the start of the month. The push higher is primarily driven by fundamental factors such as COVID-19 cases’ resurgence leading to another fiscal stimulus package set of negotiations in the USA. Another $2 trillion is estimated to be printed, which would be harmful to the US Dollar. As a result, sitting on US Dollar reserves would yield a negative return, so investors are looking for safe-haven assets to place their cash – Bitcoin being one of them.

This has led to several institutions starting to buy BTC with their cash reserves. For example, MicroStrategy increased their holdings of BTC above $500 million, and many other institutions have followed.

Bitcoin had surged higher this morning after the announcement that the ECB announced that it would be providing further monetary stimulus to the European region. Christine Lagarde, ECB President, stated that the bank would do everything they could to address the unfolding situation. Over the last couple of days, Germany and France both went into full national lockdowns amidst rising COVID-19 cases.

However, even with this announcement, Bitcoin’s price then fell lower as it broke beneath $13,500 to reach beneath $13,200. It has since bounced higher to trade at $13,275 at the time of writing. The latest drop is down to the fact that there might be another “Risk Off” scenario in the overall broader market.

Michelle Meyer, a Bank of America economist, stated that the upcoming US Elections could result in a 20% drop in the US stock market. She noted that the election result is not the biggest threat; instead, if the opposing party would contest the result, it would be a significant threat. On the other hand, a landslide victory would be much welcomed and could lead to a stock market rally.

One thing we do know is the fact that markets HATE uncertainty. It is the biggest killer for volume as investors choose to pull their assets and wait on the sidelines until the uncertainty has played out. As a result, we might see some whipsaw like price action on Bitcoin until the election has run its course over the next week.

Let us take a quick look at the markets and see where we might be heading. 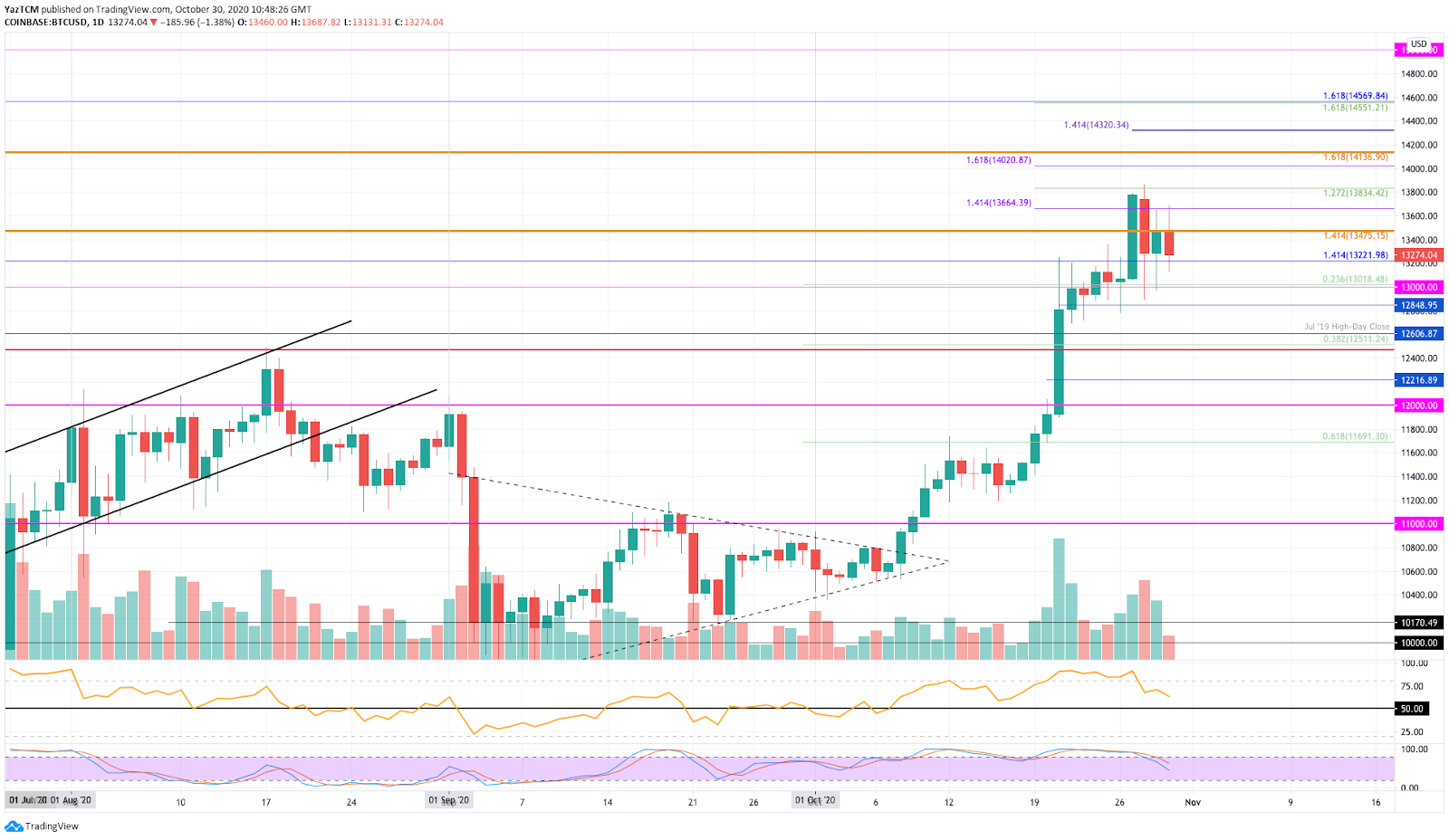 Taking a look at the daily chart above, we can see that BTC had reached a fresh 2020 high this week. It was initially struggling to break the resistance at $13,221 until Tuesday when Bitcoin’s price managed to surge as high as $13,800.

Bitcoin continued to spike higher on Wednesday as it climbed toward $13,835 (1.272 Fib Extension). It could not break this resistance, which saw the coin’s price to head lower as it spiked beneath $13,000.

Today, we can see the whipsaw like price action as BTC surged as high as $13,665 but then dipped beneath $13,200 when the Bank of America analyst predicted a potential 20% stock market drop.

Bitcoin remains bullish, despite the recent price falls. The coin would need to drop beneath $12,500 before it starts to turn neutral. It would need to continue further beneath $11,000 to be in danger of turning bearish again.

The RSI is dropping from overbought conditions but still remains above the mid-line to show the buyers still control the market momentum. However, the falling RSI indicates the buying momentum is fading.