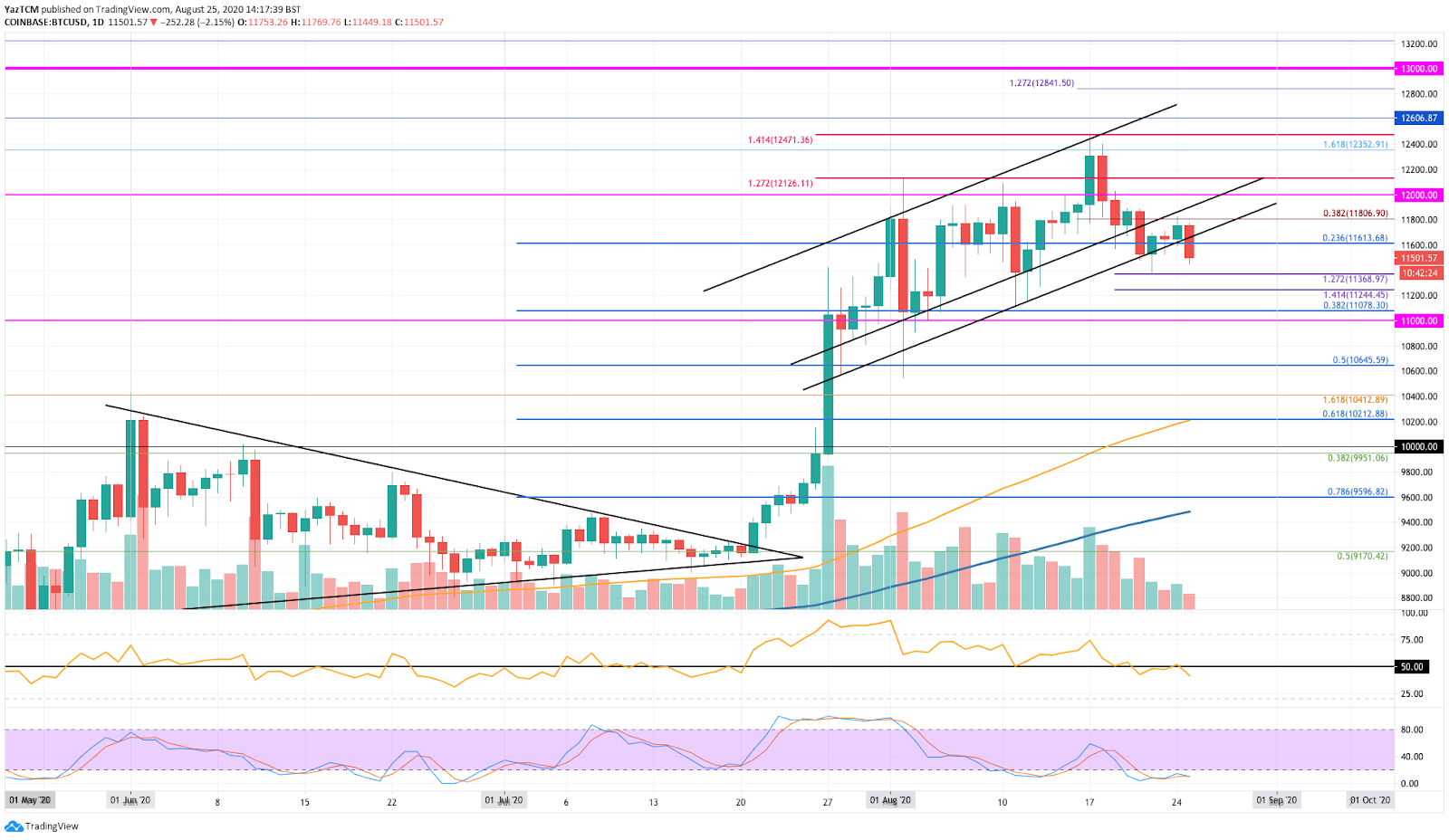 Taking a look at the daily chart above, we can see that Bitcoin had penetrated above a symmetrical triangle toward the end of July as it surged above the $9,200 level. The coin continued higher to reach the $11,800 level in August.

From there, Bitcoin rolled over and started to head lower. It broke beneath the rising price channel at the end of last week but found support at a parallel trend line. Bitcoin traded above this trend line over the past 3-days but broke beneath here today as it crashed beneath the $11,600 support (.236 Fib Retracement) to reach $11,500.

The break beneath the rising trend line has turned Bitcoin into a neutral trading condition in the short term. The coin would now have to break above $12,000 to turn bullish again. A break beneath $11,000 is likely to turn Bitcoin bearish.

The RSI has also dropped beneath the mid-line to indicate the sellers are in control of the market momentum. Luckily, the Stochastic RSI is oversold and is primed for a bullish crossover signal which should put an end to the downtrend. 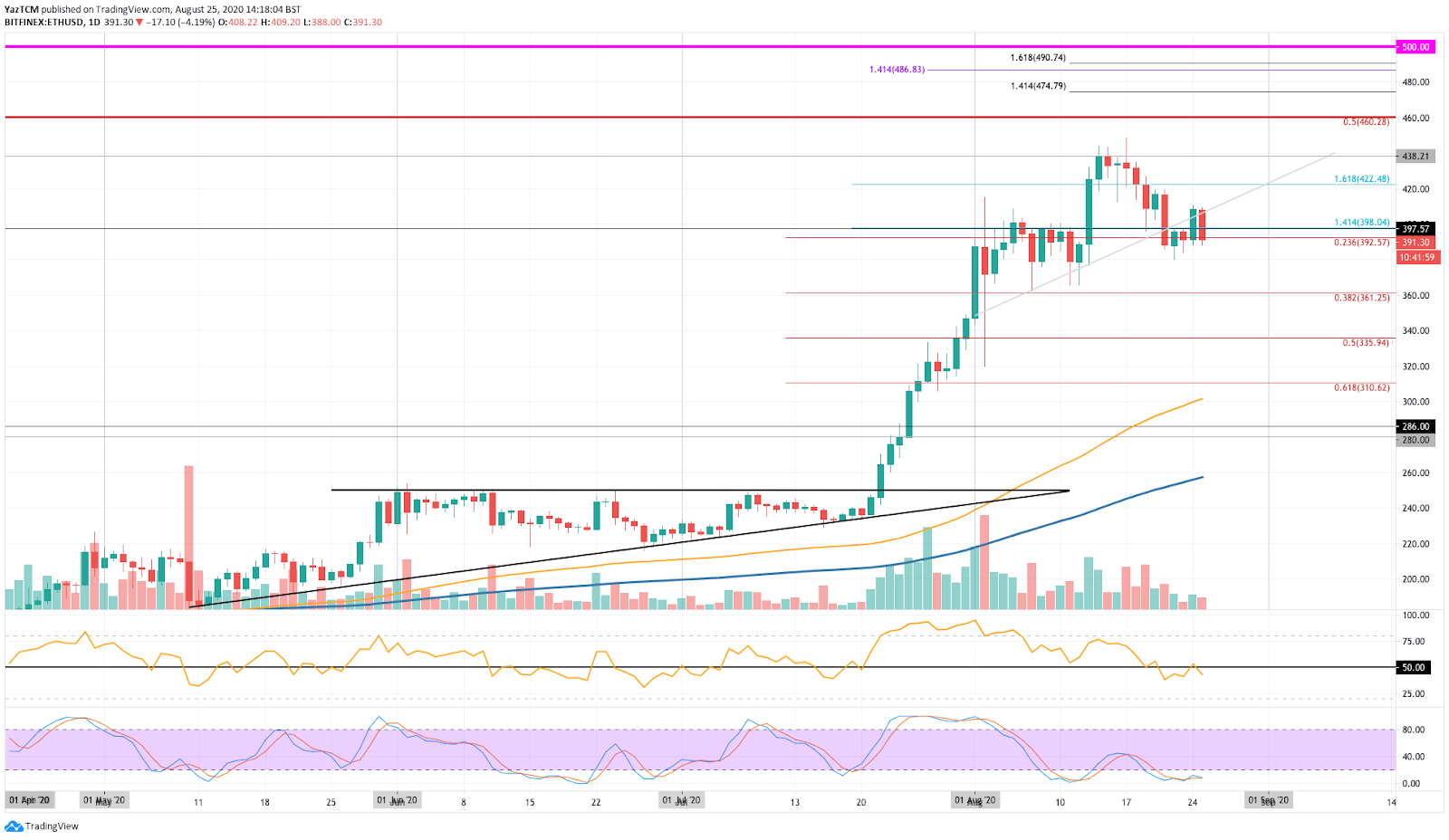 Looking at ETH/USD above, we can see that the coin surged to a 2-year high during mid-August 2020 as the coin reached $438 (August 2018 High). From there, Etheruem started to roll over as it headed lower over these past 2-weeks.

The coin initial found support around $410 but eventually went on to push beneath here as it headed lower to reach $390. It bounced from this support yesterday to break above $400 but failed to pass $408. Ethereum has since headed back beneath $400 to trade at $391 again.

Etheruem still remains bullish at this time. The coin would have to break beneath $360 to turn neutral and further beneath $310 to turn bearish.

Likewise, the RSI has dipped beneath the 50 line as the sellers take charge of the market momentum. 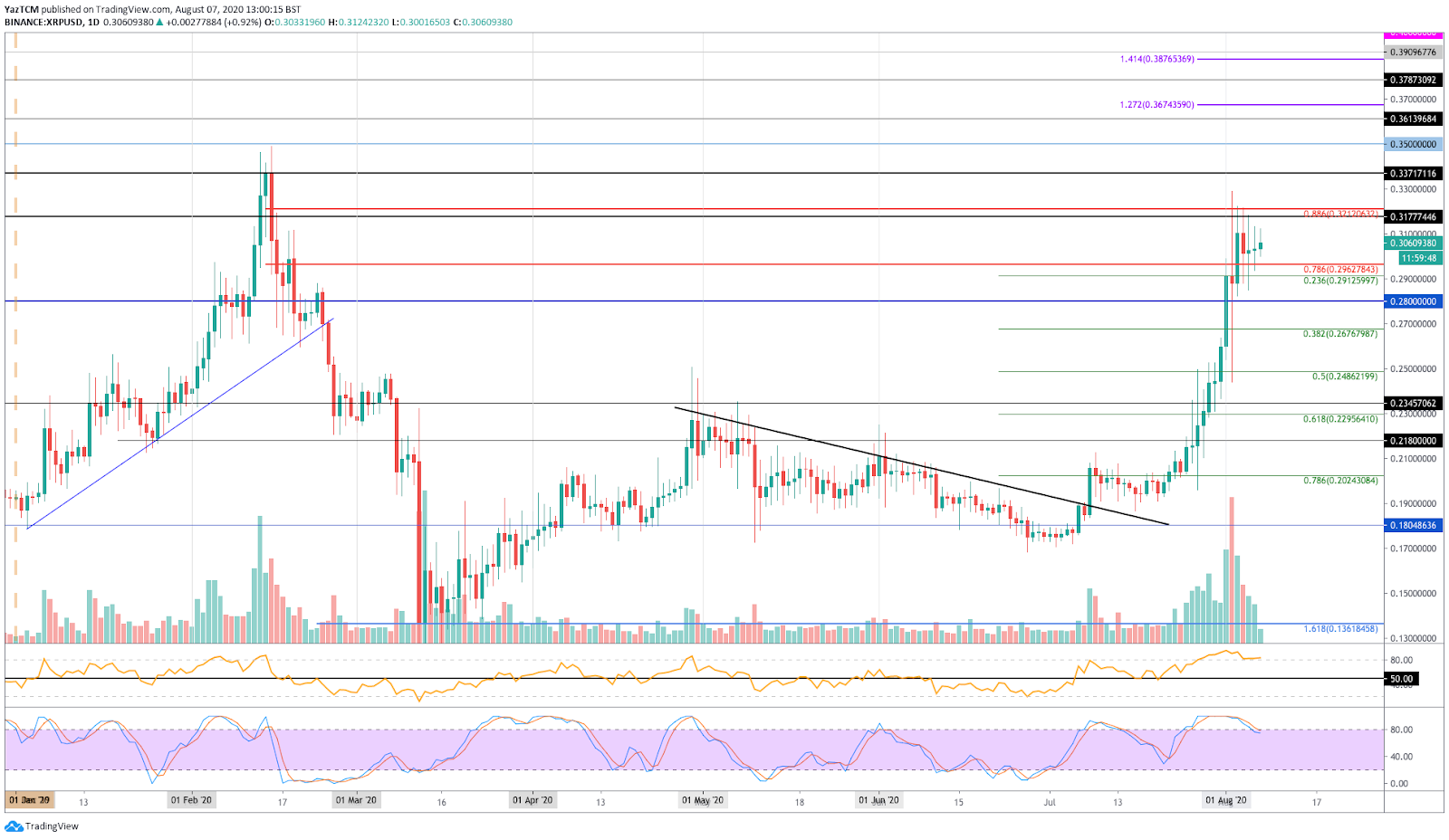 XRP had surged as high as $0.3177 during August 2020. It was unable to overcome this resistance after numerous attempts to break above it. This caused XRP to roll over and head lower over the past few days. However, we can see that strong support has been found at the $0.28 level.

XRP is bullish right now but the resistance at $0.317 will need to be broken fairly soon. The coin would need to fall beneath $0.27 to turn neutral and further beneath $0.24 to turn bearish.

The RSI has also penetrated beneath the mid-line her which suggests that the bears are in charge of the market momentum. If the RSI continues to drop, the bearish pressure will increase and is likely to cause Ripple to drop beneath the current $0.28 support and head lower.